The Divorce Dress: Schoolgirl’s incredible design made of cancellation papers ‘should be copied by top designers’

The ‘ironic’ design of a schoolgirl’s wedding dress made from divorce papers has become an internet hit and has attracted the interest of top fashion designers.

Demi Barnes, only posted a photo of her dress, designed as part of her GCSE art class, on Facebook to show it to a cousin in Italy.

But within days, her stunning design had gone viral, garnering more than 40,000 likes and prompting several admirers to ask Demi, 15, to design their wedding dress.

Scroll down for video

Online swipe: Demi Barnes’ wedding dress made from over 1,500 divorce papers went viral after she posted a picture of it on Facebook 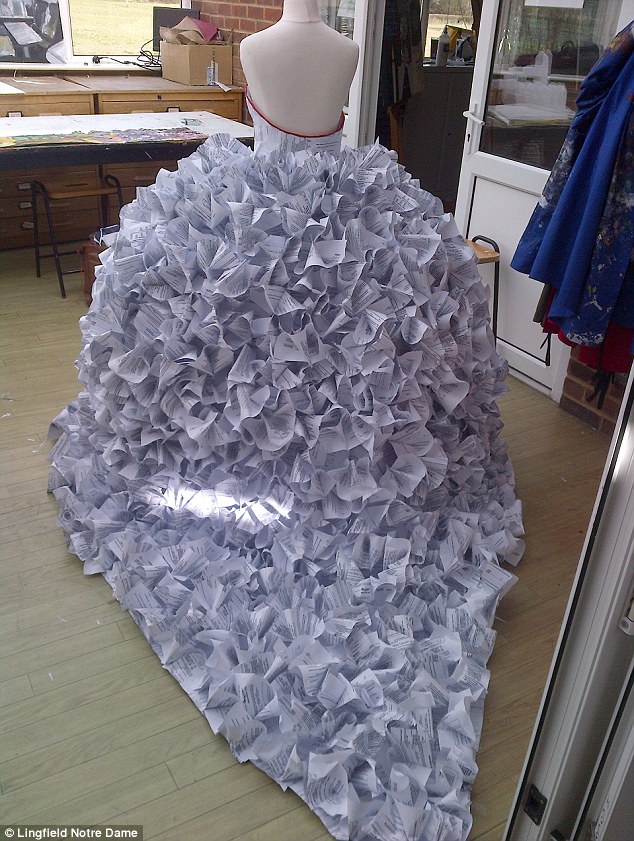 Demi, a student at Lingfield Notre Dame School in Surrey, designed the dress to represent the idea that too many people rush to get married and end up getting divorced.

The stunning dress, reminiscent of the Emanuelle dress worn by Princess Diana or one of Thelma Madine’s elaborate designs as seen on Channel 4’s My Big Fat Gypsy Wedding, was made using more of 1,500 authentic divorce papers.

Demi, a student at Lingfield Notre Dame School in Surrey, designed the dress to represent the idea that too many people rush to get married and end up getting divorced.

She said: ‘When I put it on Facebook it was just to show my cousin in Italy what I had done.

“Within a week it had had over 40,000 hits and people were approaching me to design their wedding dresses. 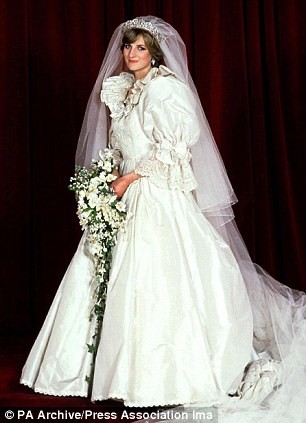 Diana, Princess of Wales after her wedding. The schoolgirl was inspired by the iconic dress

“Big designers have asked for copies.

“I am passionate about fashion and design and I hope someone will offer me an internship in a company so that I can turn my passion into a career.”‘

Demi’s head of art at school, Claire Davis added: ‘Demi charged, like electricity, when she came up with the idea for the dress.

“It was an incredibly ambitious piece and it took courage, patience and tenacity to bring it to fruition, from concept to final piece.”

Demi was originally supposed to make the dress from magazines, but decided on a more interesting concept and put it together using a metal bodice frame and divorce papers stapled to it.

Lingfield Notre Dame principal Richard Bool said its design was the talk of his class.

He said, “I am extremely proud of the work that Demi and the entire art department have done this academic year.

“It’s also a pleasure to see the power of social media working for a student in a positive and responsible way.”